UP NEXT: 2020 SEASON While our full season is up in the air because of everything going on with COVID-19, we are committed to doing what we can to keep local theatre active in Cedar Springs. SUMMER KIDS MUSICAL: We Are Monsters WHIMPERING WAMBAT! What a remarkable time we live in! Social distancing, designer face […]

END_OF_DOCUMENT_TOKEN_TO_BE_REPLACED

This is where we post the dates for our monthly meeting, auditions, performances, and other events.

END_OF_DOCUMENT_TOKEN_TO_BE_REPLACED

Check out this great article in the Cedar Springs Post!

The Cedar Springs Community Players (CSCP) is bringing a new mystery to our town in the form of its next performance written by local playwright, Scott Phillips. This is Mr. Phillips’ first mystery, but like all his other plays the script was born from conversations he had with family, friends and strangers.

“Friends had been asking me to write a murder mystery,” explained Phillips. “I finally had enough stories and ideas to pull it into a script.”

Advanced tickets are $12.00 and are available at the Cedar Springs Public Library or by emailing phillips4ba@yahoo.com.

Things are coming together!
We are excited to put ALICE IN WONDERLAND JR. on stage in August.

We are casting students ages 8 to 18.
Rehearsals up until the week of show will be from 1-4pm at the CS United Methodist Church.
Rehearsals during show week will be at 6:30pm in the Kent Theatre.

In an effort to share more pictures and info about upcoming events in and around Cedar Springs, we’ve started an Instagram page.

Also, if you have suggestions of more things we should post, give us a shout-out here, or on Facebook, or on Instagram, or in person (though we suggest you shout out before a performance rather than during it).

We love to hear from you! 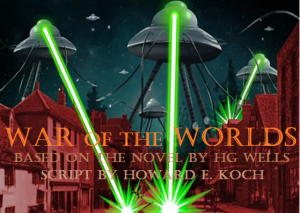 Check out this article by Tom Noreen announcing our production of Seussical Jr.

POMPEII THE MUSICAL by Scott Phillips

A few years ago, a local theater group decided to perform Titanic: the Musical, a Broadway play.  To local playwright, Scott Phillips, it seemed rather bizarre someone would take this horrific event and add a lot of song and dance.  In keeping with Scott’s tradition of irony and sarcasm, he decided to write Pompeii: the Musical.

The play is set in ancient Rome and tells the story of two young lovers whose romance is in jeopardy.  To the rescue comes the dysfunctional family and friends, along with a prominent Roman oracle.  Adding to the mayhem is the increasing rumblings of the volcano, Vesuvius.  Obviously, things don’t go so well.  History tells us how Pompeii ends, but theater can always twist things a bit.

Pompeii is Scott’s 10th play and 5th musical.  The music is written by his sister, Jill Detroit, and his nephew Sean Anthony.

Adult tickets are $12 in advance, $15 at the door; tickets for those under 18 years of age are only $6.  Advanced tickets can be purchased at the Cedar Springs Public Library, or reserved by emailing Scott atphillips4ba@yahoo.com.

The Cedar Springs Community Players will be putting on a series of two theater workshops for youths ages 8-18. They will be on March 25 and April 29 from 1:00 – 2:30 at the Cedar Springs United Methodist Church on Main Street.

The two workshop sessions will cover different topics and are designed to be both fun and educational. Kids will have a chance to learn acting skills and stagecraft, learn about all the people who make a theater production happen, and hear about our upcoming production “The Lion, the Witch, and the Wardrobe.” No experience is necessary, just a willingness to join in and have fun.

The workshops are free, but space is limited and there are some rules:

– You must register in advance for the workshops – no walk-ins will be allowed. Click here http://bit.ly/2ms32gX to register. Make sure you enter the name and age of each child in the comments box and a contact number where you can be reached.

– A parent or guardian must be present for the entire workshop. They must complete paperwork for the minor children, including a photo release, and then will be part of the “audience.” If the parent or guardian needs to leave the workshop, their child must go with them.

– Attendees should wear comfortable clothing and shoes as they will be moving around and standing a lot during the workshop.

– If you have questions about the workshop, please use the link above to contact us via email and we will get back to you.

Ghouls just want to have fun! Who doesn’t enjoy a few belly laughs now and again, even if you are the living dead? We have selected three hilarious fantasy/science fiction/monster one acts for your entertainment!

The Players are just itching to perform their next project – the third annual Springtime One Acts at the Kent. This year it’s a trio of one-act plays featuring fiendish monsters and bone-chilling characters who will be performing on the Kent Theatre stage March 24-26.

The Rot features the perils of living in the suburbs and attempting to have a nice dinner with your future in-laws and a pesky zombie who won’t leave the yard!
Then it’s action in the old West as Zombie Gunslingers head into town to stir up trouble at the local saloon! There are no customers at the Wet Yer Whistle Saloon because the Temperance Ladies done smashed all the bottles of Red Eye whiskey, confiscated all the bullets and burned up all the Poker cards. While waiting for the next stage coach to arrive, the saloon girls hear of zombie gunslingers heading their way. Quick thinking and fast action have the girls concocting their own brew of Red Eye to keep the zombies satisfied.

Set in the future, Country Folk, Lycanthropes and Extraterrestrial Entities features alien visitors to our Moon’s dark side are prepared to take a pack of werewolves off to their planet, but, alas! The ship crash lands in the southeastern US and the locals are ready to do some shootin’ to rid the countryside of the Tourist Dogs in Clothes!

Auditions for “Zombies, Werewolves and Aliens, Oh My!” are on February 13th and 14th between 6:30 and 8:00 at the Cedar Springs United Methodist Church.

The Cedar Springs Community Players will be presenting three Sci-Fi Fantasy one act plays on March 24, 25, and 26th at the Kent Theatre.  “Zombies, Werewolves and Aliens, Oh My!” kicks off the 2017 Fantasy themed season.  The three short comedies are set in the old west, modern day suburbia, and outer space in the future and feature hilarious encounters with an assortment of monsters and aliens.

People have always loved stories about monsters.  Our literature is full of entities with mysterious origins with great strength or different abilities that we must somehow overcome.  Traditionally, this is done with fierce battles and intestinal fortitude on the part of the hero.   And since conflict is a great plot device, these stories about monsters have long been a part of our film and theater history, too.  Mary Shelley’s “Frankenstein, or the Modern Prometheus” was published in 1818 and she is known to have seen a play based on it in 1823.  And this popularity endures – in 2016 there was even a Frankenstein ballet.

And, of course, vampires, zombies, and aliens are everywhere these days, too.  Over time, these scary monster stories started to take on a more humorous side.  Low movie budgets led to cheesy looking special effects and a proliferation of odd titles like “Bride of the Monster,” “Santa Claus Conquers the Martians,” and the modern classic “Abraham Lincoln vs. Zombies.”

And you can expect to see a fair amount of “cheesiness” and comedy on stage in March.  We have a lot of roles to fill – both actors and monsters – in these three plays and would love to see you at auditions.  And if you enjoy monster makeup, exotic costumes, know how to make a convincing looking ray gun or other things out of tin foil, please let us know!

Auditions for the show are on February 13th and 14th between 6:30 and 8:00 at the United Methodist church.  If you are interesting in helping out behind the scenes, please feel free to come to the auditions and introduce yourself or send us an email at contact@cedarspringscommunityplayers.org.  This is going to be a fun show and we want you to be a part of it! 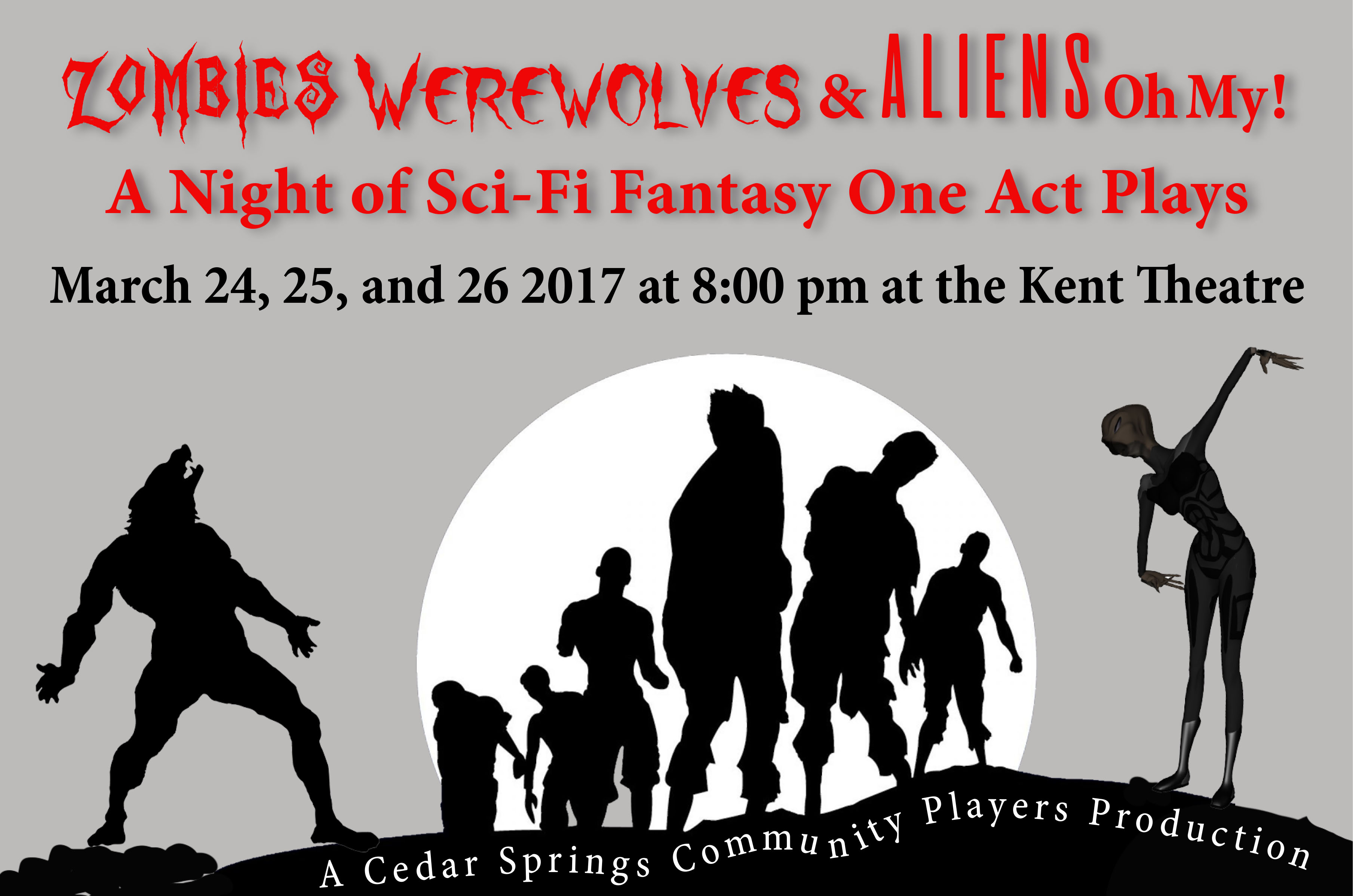 The Cedar Springs Community Players is pleased to announce its first annual comedy “Improv Night” debuting at the Kent Theatre on Wednesday, Jan. 25. Doors will open at 6:30 and the show begins at 7 pm. Local talent will take to the stage to entertain their audience for 90 minutes. Cost is only $5 at the door. It’s not The Second City, but in the same fashion, it should be an evening of grins and giggles as performers quickly create characters and dialog in the spur of a moment!

Improvisational theater is a form of live theater in which the plot, characters and dialogue of a game, scene or story are made up in the moment. The most direct ancestor of modern improv is probably the Commedia Dell’Arte, which was popular throughout Europe starting in the mid-1500. Troupes of performers would travel from village to village, presenting shows in the public squares and on makeshift stages. They would improvise the dialog, within a framework provided by a set called a “scenario.”

During the 1920’s and ‘30’s, a woman named Viola Spolin developed a new approach to teach acting. It was based on a simple yet powerful idea that children would enjoy learning the craft if it were presented as a series of games.

Spolin’s son, Paul Sills, built on his mother’s work and was one of the driving forces of improvisational theatre centered at the University of Chicago in the mid-1950. Along with people like Del Close and David Shepherd, Sills created an ensemble of actors who developed a kind of modern “Commedia” which would appeal to the average man in the street. The goal was to create theatre that was accessible to everyone.

The group that sprang from the work of Sills, Shepherd and Close, called The Compass, was extremely successful. It brought people to the theatre who, in many cases, had never gone before. Eventually, it led to the development of a company called The Second City in Chicago, which opened its doors in December of 1959 and has since grown to become the world’s premier comedy club, theatre and school of improvisation. The main focus of the theater was to provide a place where scenes and story were created improvisationally, using the same innovative techniques that Viola Spolin had developed and taught.

The Players hope to form a permanent Improv troupe which would be able to perform in area locales all throughout the year. They encourage any persons interested in being a part of the troupe to attend the performance and leave your name at the box office or leave a comment on their website cedarspringscommunityplayers.org.