Congratulations to cast and crew of The Foreigner for a fantastic opening night!

Check out the action from backstage. Come join the fun tonight at Kent Theatre at 7:30 PM. 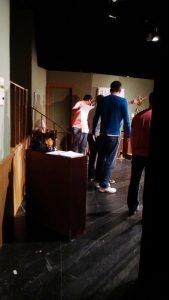 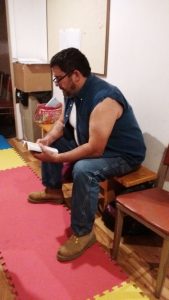 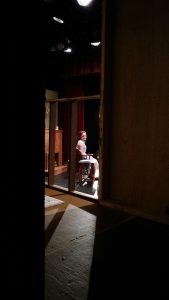 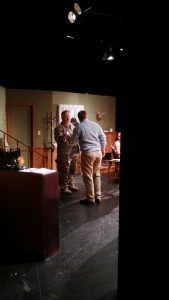 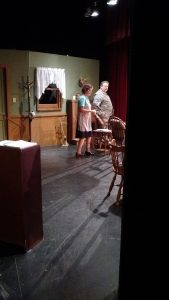 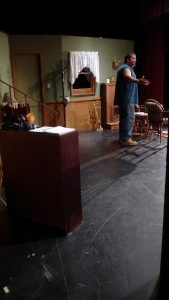 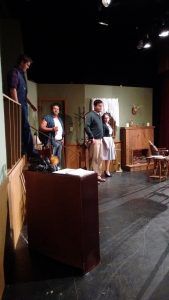 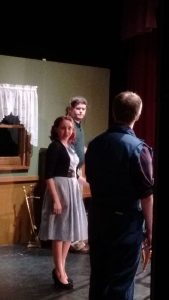 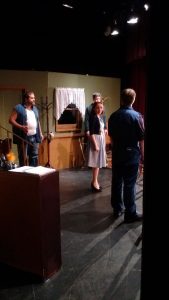 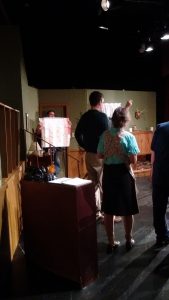 See The Foreigner this week!

The Foreigner will be presented by the Cedar Springs Community Players at the Kent Theatre on Thursday, Friday, Saturday, October 13, 14, and 15, 2016 at 7:30 p.m. Tickets are $12 at the door. Character and prop sponsorships will be available in the theater lobby for $5.

We also have a great display of stories and pictures of Jack Clark and his history with the CSCP. The Foreigner was his favorite play and this production is dedicated to him. Please come out and enjoy the show.

The Cedar Springs Community Players proudly present The Foreigner at the Kent Theatre on October 13, 14, and 15.

The comedy takes place in Betty Meek’s Fishing Lodge Resort in Tilghman County, Georgia. Mostly middle-income people come to this laid back, off-the-beaten-track resort to fish, swim, play a little cards and fill up on Betty’s down-home cooking. Now insert into the mix, Charlie, a foreigner and shy proofreader who is brought to the resort from England by his friend, “Froggy”. Charlie wants nothing more than to be left alone and is fearful of making conversation with strangers. So “Froggy” tells the others that Charlie is a foreigner and speaks no English. The fun really begins when Charlie overhears more than he should and things get complicated. The show has one comic surprise after another and the “good guys” emerge triumphant! Even though The Foreigner takes place in the recent past, the Golden Rule in dealing with people, even though they are “foreigners” is as relevant as it always has been.

This is the 76th show by the Cedar Springs Community Players in the 45 years of producing plays and musicals in the community. The Foreigner, by Larry Shue, is directed by Sue Harrison, with Nancy Noreen as Production Coordinator, Charlene Sommer as Stage Manager, and Deb Irwin working with props.

Many of the cast members have worked with the Players before or with other community theatre groups. The cast includes: Doug Christensen as “Froggy” LeSueur, a British officer; R.J.Moore as Charlie Baker, a pathologically shy British proof-reader; Laura Johnson as Betty Meeks, widow and owner of the resort; Mark Stoll as Rev David M. Lee; Anna Ambrose is Catherine Simms, a former debutante engaged to Rev. Lee; Rod Zamarron as Owen Musser, a backwoods scoundrel with tattoos; and Tom Johnson as Ellard Simms, a backward boy who is Catherine’s brother.

The Foreigner opens on October 13th at the Kent Theatre!

Here are some photos that have been taken during rehearsals and the Red Flannel Festival.

The Cedar Springs Community Players are both honoring the past and trying something new with their upcoming production of The Foreigner. The show is being dedicated to Jack Clark, a longtime member, who died earlier this year. The Foreigner was Jack’s favorite show and he would travel all over the state to see productions of it. There will be displays of photographs and stories about Jack’s participation in past productions at the theater. If you have photos or a memory to share, please contact Bob Clifford at contact@cedarspringscommunityplayers.org.

The Players are also offering some fun sponsorship opportunities for their theater patrons. The Foreigner is a play with a single set and there are a number of items that appear on the set or are mentioned in the play – some of them quite humorously. Sponsors will receive special pins that they can wear during the play to show they are an official Croquet Mallet, Carrot, Spoon Rack, etc., sponsor. Sponsorships are as follows:

Sponsorships can be purchased at the theater on the day of the performance or in advance from a Players member or cast member.

Friends of the Players and the cast and crew can also send well wishes to them in the program for $10 and local businesses can advertise in the program as well. Please contact Bob Clifford at contact@cedarspringscommunityplayers.org.